Britain is a nation of decisive homebuyers who are quick to fall in love with a home and act fast to buy it, according to a survey by My Home Move, the UK’s leading provider of mover conveyancing services.**

More than three in five (61%) homeowners surveyed were able to buy the home they originally fell in love with. A quarter (25%) were lucky enough for this to be the first home they viewed, highlighting the decisive nature of British homebuyers.

The research also found that house hunters know extremely quickly whether they like a property. A quarter (26%) of homeowners made the decision to buy their home even before viewing the whole property, with one in five (18%) making the decision within 30 seconds of entering the property and one in ten (8%) knowing before even entering.

In contrast, one in six (17%) needed a second viewing to decide it was the home for them.

Reassuringly, almost half (45%) of buyers say they did not have to make any sacrifices or compromises when buying their home and are therefore living in their dream home. 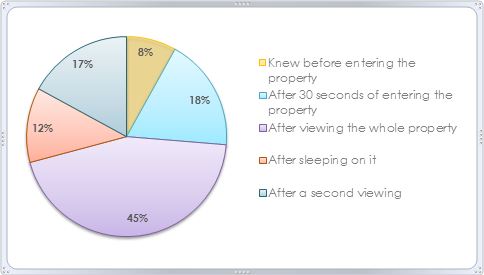 However, it is not a fairy tale story for all homebuyers in Britain – first time buyers and those in London make more sacrifices or compromises

The survey carried out by My Home Move found that one in ten (11%) homebuyers found it much harder to find their dream home and had to view ten or more properties before finding their home.

Four in ten (39%) had a perfect home that ‘got away’ and were not able to buy the home they originally fell in love with, rising sharply to six in ten (60%) of Londoners.

60% of homebuyers in London had a dream home ‘that got away’, compared to 39% in the rest of Britain 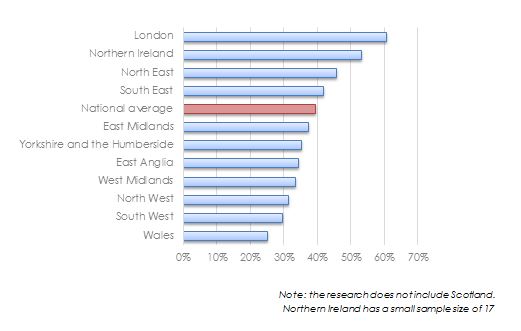 Note: the research does not include Scotland.
Northern Ireland has a small sample size of 17

Buyers in London were also more likely to make sacrifices or compromises when choosing their home. Seven in ten (70%) said their current property did not have everything they wanted, compared to only 55% for Britain as a whole. This is due to the sky high demand and shortage of properties for sale in the capital, alongside rocketing prices, meaning buyers in London have fewer options to choose from. This also contrasts with other parts of the country, such as the North West, which saw only 44% having to make any sacrifices or compromises.

The most common reason homeowners were not able to buy a property was being outbid by another buyer. This happened to 27% of buyers, and is much more likely among first time buyers than older homeowners, with two in five (41%) of those aged under 30 being outbid, dropping to 26% or less for those aged above 51.

The second biggest reason for losing out on a dream home was being ‘gazumped’ (17% of buyers), where the seller accepted a higher offer from a new bidder after accepting the original offer. This trend also rises significantly for those aged under 30 to almost two fifths (38%) who were gazumped, falling to 15% or less for those aged above 51.

“As a nation, we are very decisive when it comes to our homes. Owning a property is an ambition for most Brits and people are increasingly aware of what they want in their new home – they are savvy buyers, thanks in part to the multitude of property programmes on television and the ability to research available homes via the internet. By the time it comes to arranging a viewing, the typical buyer now knows all about the location they are interested in and what the property is like from its online profile. This means they can make their mind up extremely quickly; and in some cases, even before setting foot inside the property.

“People typically think of house hunting as a long, drawn out nightmare; however our latest research shows a significant number of homeowners were quick to buy the house they fell in love with.

“Unfortunately though, not everyone gets their fairy-tale ending. The housing market is much more competitive for buyers in London and particularly for first time buyers. These home hunters have to see more properties, make more offers and compromise more often, especially on budget. They are far more likely to have some heartbreak along the way, as they become victims of increasing house prices and gazumping.”