Buying a slice of life: Shared Ownership popularity rockets as one in five purchased by first-time buyers

The popularity of shared ownership purchases has increased by over 130% since 2011, research by My Home Move, the UK’s leading provider of mover conveyancing services, has found. [Chart 1]

The shared ownership scheme, which was re-launched with government backing eight years ago via HomeBuy Direct, has grown in popularity as house prices across the country have risen by nearly 30% since 2011.* Having analysed over 100,000 of its home buyer records, My Home Move discovered that on average, shared ownership buyers prefer to purchase just 21-40% of the property, costing on average £67,000. [Chart 2]

Shared ownership purchases account for around 1% of property transactions year each, with nearly one in five (17%) being purchased by first-time buyers. [Chart 2]

Commenting on these findings, Doug Crawford said, “For many, the prospect of buying a home outright is still a pipe dream, as prices have risen by around £60,000 since 2011, meaning that a home in the UK now costs an average of £217,000, or if you’re looking to buy in London, nearly £500,000. It is no wonder that solutions like shared ownership have grown in popularity, and by the end of 2017 we would expect shared ownership transactional volumes to account for more than 1% of all activity – especially as many lenders are now more willing to lend on shared ownership schemes, which historically only a small number of building societies would.”

The research also revealed that, on average, the age of those buying a shared ownership home has decreased, with those in their mid-thirties now accounting for the majority of purchases; while between a third and a half of all shared ownership transactions take place in London and the South East each year.  [Chart 3]

Continuing, Doug Crawford said, “Whereas six years ago it was those in their 40s who looked to buy a shared ownership home, today it is those in their 30s – thanks in part to the Help to Buy: Shared Ownership scheme. We know that location ranks highly on people’s property wish list, which is why is makes perfect sense for those wanting to live and work close to the Capital to look for alternative housing models to enable them to afford the first step on the ladder.”

Chart 1 – showing the total number and regional breakdown, 2011 –2016 (Nov) of Shared Ownership purchases, based on My Home Move/MI data.

Chart 2 – showing the average age of Shared Ownership buyers, share size of purchase, price and percentage. Based on My Home Move/MI data 2011 –  (Nov) 2016. 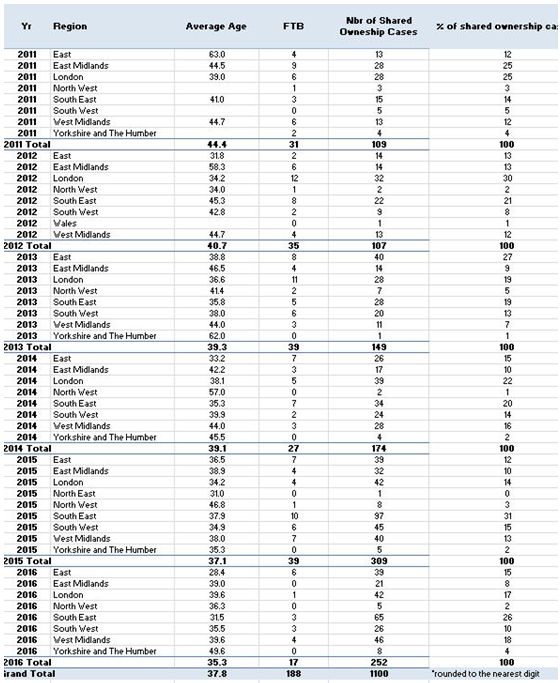