London and North-West emerge as England and Wales’ leasehold hotspots

An analysis of over 20 million property transaction records in England and Wales by My Home Move, the UK’s leading provider of mover conveyancing services, reveals that an average of 15% of residential properties are leaseholds.* However, this rises sharply to 53% in the leasehold hotspot of London and 46% in Manchester (see map, attached).

With leasehold properties usually taking longer to purchase and coming with additional legal obligations and costs compared to freeholds, the findings will help home buyers know whether the area they are targeting is a leasehold hotspot.

My Home Move’s analysis of Land Registry’s price paid data, found areas that have experienced extensive redevelopment like London’s N1C postcode and the M15 and M50 postcodes in Manchester top the list of leasehold hotspots and can have a leasehold proportion above 90% (methodology below).

Overall, the centres of large cities also have a much higher proportion of leaseholds than freeholds. While the Top Twenty hotspots are dominated by parts of London and Manchester, Liverpool, Newcastle and Birmingham also have areas that make the list (see figure 1, below).

Increasing property prices and a high population density make property development a profitable enterprise in these areas – which has led to an increase in the number of leaseholds as houses are split into flats and new apartment blocks are built.

Buying and owning a leasehold property comes with additional legal obligations, which house-hunters searching in areas of high leasehold density should be mindful of. These are covered in My Home Move’s top tips for buying a leasehold.

Commenting on the findings, Doug Crawford, CEO of My Home Move, says:

“The redevelopment of England and Wales’ towns and cities over the last 30 years means there are more leasehold properties on the market, as new build apartment blocks are constructed and old warehouses are converted into flats. Controversially, even some new build houses in suburban and rural areas are now sold as leasehold properties. The investment has given the countries’ housing stock a very welcome boost, but it also means that buyers are more likely to encounter a leasehold property than ever before.

“While the high proportion of leaseholds in the centre of major cities will shock few developers and estate agents, would-be buyers looking to claim a little piece of the city as their own may be in for surprise. Leaseholds make up almost all of the housing stock in some of our cities’ redeveloped districts, and the proportion of leaseholds could grow even more as additional new developments come onto the market.”

A tale of two cities

In London more than 60% of residential properties in the central WC, EC and W postcodes are leaseholds (see map, attached). However, none of the Greater London postcode areas have an average leasehold density greater than 40%. West London postcodes have a slightly higher proportion of leaseholds than Eastern ones, which may be because of historically higher property prices in these areas attracting more investment.

Not all areas in the UK’s major cities have a high proportion of leaseholds, however

Elsewhere, Berwickshire and rural Wales are among the areas that have the lowest proportion of leaseholds in the country.

“Although the distribution of leaseholds may not be even, it is important that knowledge of the differences between the two types of residential tenure is universal. Home buyers need to understand that while purchasing a leasehold means they own the property, they won’t necessarily own the building or ground on which it is located. As a result of this, leasehold buyers often have to pay ground rent, service charges, and buildings insurance to the building’s owner.”

“Before buying a leasehold, would-be owners need to make sure they know how long is left on the lease and when this will need to be reviewed, and ensure they factor any additional charges into their financial planning. By doing so, buyers can save themselves from any potential shocks further down the line.” 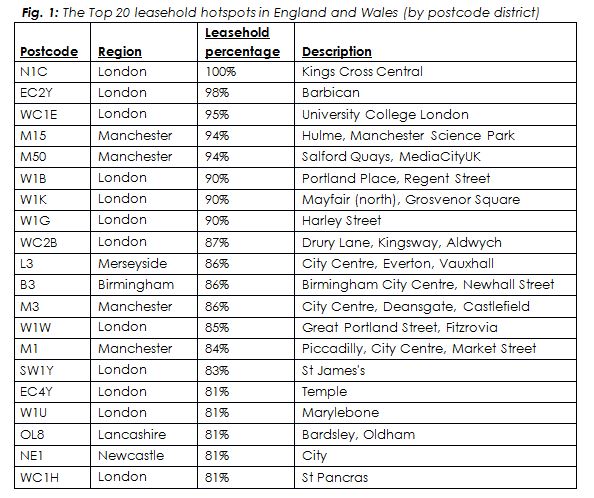