The number of properties being purchased by investors has dramatically decreased, since the introduction of the Stamp Duty levy for additional home buyers, research by My Home Move, the UK’s leading provider of mover conveyancing services has found.

Figures dating back to 2014 show that the once buoyant investment market has halved in size since 1st April 2016, as landlords and additional home buyers have turned their backs on paying the additional 3% stamp duty charge.

“Even though a year has passed, the introduction of the Stamp Duty levy still remains controversial. On the face of it, the changes to Stamp Duty were presented by the Government as a tax that would affect ‘greedy’ landlords – those who were snapping up properties away from first-time buyers. However in reality, people who buy additional homes aren’t just landlords with vast portfolios of properties, but parents looking to help their children while at university, or retirees wanting to buy themselves a holiday home.

“I’d argue that the Government’s tax play has affected individuals looking for a second property far more than the career landlord. If anything, the changes have resulted in money being redirected into gifted deposits, particularly for second steppers and middle movers.”

In the months leading up to the Stamp Duty changes, gifted deposits accounted for around 8.4% of all purchase transactions – however, once the law changed, the data showed an increase to around 9.3% with ‘second steppers’ and ‘middle movers’ becoming the largest beneficiary group. (See Chart 2 & 3)

Continuing Doug Crawford said, “It would appear from the data, that while investors were choosing to back-off on buying additional properties, the number of gifted deposits was rising at a rate of around 1%; the equivalent of an additional 3,000* properties were bought using a gifted deposit in the six months after the stamp duty change.

“As such I suspect it’s the parents, those who ordinarily would have bought a second home, who have redirected their savings towards their children to help them onto, and up, the property ladder.

“Our research has revealed that while ‘second steppers’ and ‘middle movers’ have always received the greatest number of gifted deposits, after the Stamp Duty change this number increased by 8% over the year. The Bank of Mum and Dad has once again had to step-in to help those struggling financially to move beyond their first home – a situation caused by the lack of housing stock and inflated property prices.” (See Chart 2) 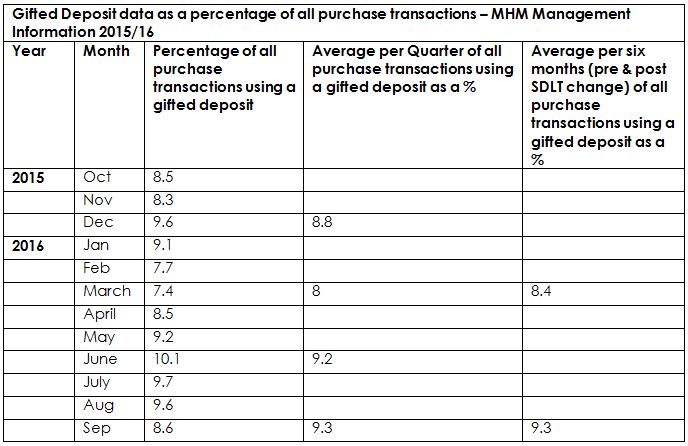 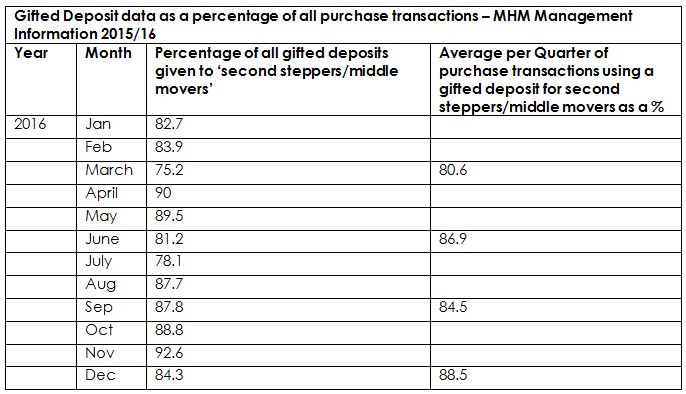