– Big North-South divide sees homes change hands every 16 years in the South East, compared to every 22 years in the North East

Homes in the South East, South West and London change hands much more frequently than those in other parts of the country, according to analysis by My Home Move, the UK’s leading provider of mover conveyancing services.

Properties are held by their owners for an average of just 16 years in the South East and 17 years in London and the South West. By contrast, homeowners in the North East are keeping their homes the longest, with property changing hands every 22 years on average, 36% longer between sales than the South East. (see table)

A higher rate of property ‘turnover’ between owners is a sign of a healthy housing market as people move to new areas for work, upgrade to a larger home to accommodate a growing family or downsize when they no longer need the extra space.

Doug Crawford, CEO of My Home Move, comments:
“Homes in healthy property markets change hands often, as people move up the housing ladder or move to new areas for jobs or a change of lifestyle. Our research reveals a striking regional trend moving from the South coast up the country, with homeowners in the South likely to move much more frequently than those in the North, who tend to stay put for longer. England has a two-speed house market, which reflects its two-speed economy. The stronger job market and higher incomes in the South mean that people buy and sell homes more often than in the North.

“Interestingly, it’s not just the South East that has a relatively healthy number of homes changing hands: the West Country is also thriving. Regional towns like Exeter, Bath and Bristol have vibrant housing markets and the region as a whole also benefits from people moving there from other parts of England for a slice of the ‘good life’.”

Doug Crawford, CEO of My Home Move, adds:
“It is reassuring to see that homes are changing hands much more often than they were five years ago. This has been a period of economic growth and the house market has been improving hand-in-hand with the economy. The combination of low inflation, reduced unemployment and improving wages means that people feel confident in their prospects and are more enthusiastic about moving to a new home. At the same time, improving mortgage availability and low interest costs have made it easier for consumers to finance a home purchase.

“With interest rates set to stay low for longer, according to the latest Bank of England predictions, the next 12 months could see a further improvement in the housing market across the country.”

Chart: Average number of years between property sales compared to 2010 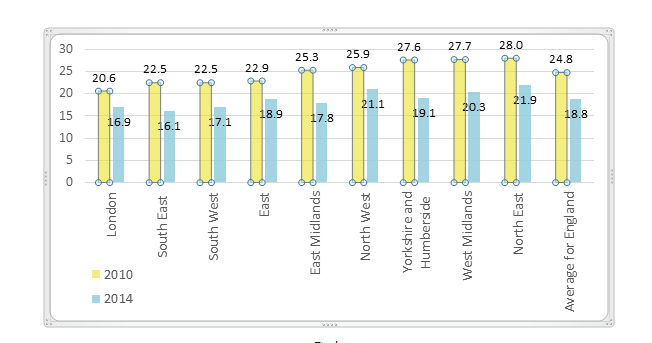