The property market and the weather – a very British obsession

With the British public famed for their obsession with the weather, the UK’s leading provider of mover conveyancing services, My Home Move, has discovered that the weather really can affect when people buy and sell houses.

The research of over 1,000 weather and estate agency reports revealed that first-time buyers avoid temperature extremes when house hunting, preferring to shop for their first home when temperatures level out between 7-10 °C and 15-21 °C, avoiding the excessive highs and lows of Britain’s seasons. (Fig.1)

In comparison, those looking to sell their homes are motivated, on average, by the soaring temperatures of the summer months. 2014 and 2015 saw an average high of 51 and 55 homes for sales per branch when temperatures peaked for the year, according to the National Association of Estate Agent’s Housing Market Report.

In relation, 2016 saw a high of 41 properties for sale per branch in August – the second highest number recorded, compared to an annual low of just 33 properties listed in January when temperatures fell to 8°C (March recorded the highest figure with 54 sales per branch – a reaction by the market to beat the stamp duty deadline for additional homes, which became law on 1st April 2016 – a unique event within the property market). (Fig. 2)

“As a nation we are famed for talking about the weather and often teased by our European and American friends for it. But on a serious note it would seem that the weather can have an impact on the behaviour of Britain’s house hunters and sellers, and paying attention to the outside temperature could help the industry predict when to market to first-time buyers, or look to attract new sellers as the weather hots up.”

(Figure 3) Graph showing that home buyers and sellers are undeterred by the rain: Average rain fall in mm vs. no. of house hunters/sales agreed and properties available for sale per branch, 2013 – August 2016. (Met Office/NAEA data)

Continuing, Doug said, “However, it would also appear from the research that us Brits are so used to the rain that it has no obvious, negative effect on the property market and the number of house hunters, even during the wettest months of the year, still average at over 330 per branch*.

“So even when it’s raining cats and dogs we are still happy to put our homes on the market, view properties and even make an offer – confirming our belief that the property market will continue to be ‘as right as rain’.”

The month of December proved a poor month for sales agreed per branch, recording the lowest number each year, at an average of just six. (Fig. 4)

The research covered the years 2013 to 2016*, comparing the national average weather reports for each month and year from the Met Office, with Housing Market Reports complied by the National Association of Estate Agents (NAEA) which show the average number of house buyers, sales agreed, first-time buyer activity and the number of properties available for sale per estate agency branch, across the England and Wales. 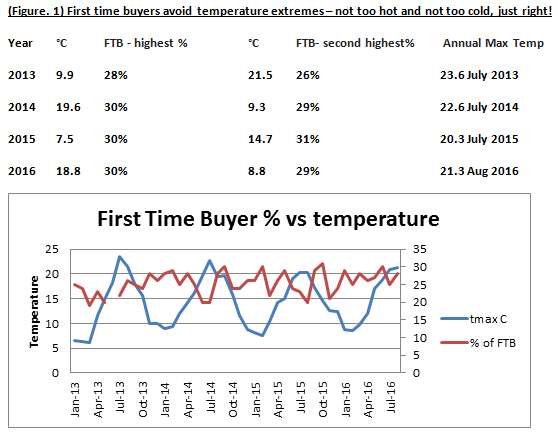 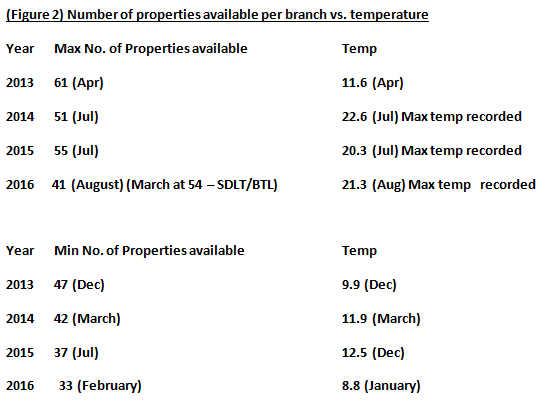 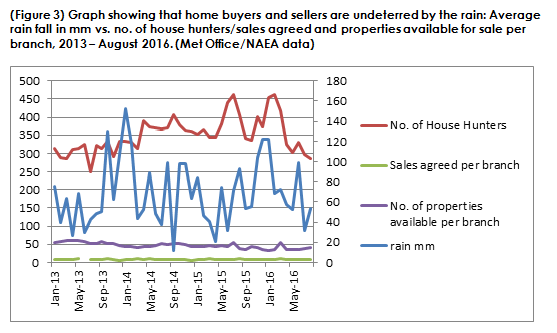